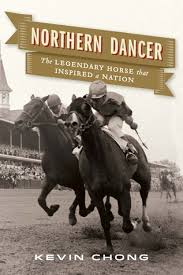 In every sport there are a select few competitors who come to define the excellence that all others aspire to. In “the sport of kings,” there is one that stands alone. Northern Dancer is not only a Canadian legend, but the cornerstone of his breed. It has been estimated that 70 percent of the thoroughbreds alive today are his descendants, which includes the majority of the horses running in the biggest races around the world. His offspring received record-breaking prices on the auction floor.
More than his prepotence as a sire, Northern Dancer is known for his legendary 1964 campaign, which saw him win two of the Triple Crown races in the U.S. and Canada’s Queen’s Plate. In that time, he captured the attention of the world and the hearts of all Canadians. In Northern Dancer, the world-famous horse comes alive through the people whose lives he touched: E.P. Taylor, the visionary industrialist whose web of business placed him at the end of every consumer transaction for every Canadian and made him the subject of scorn; Horatio Luro, the dapper Argentinean trainer (and tango dancer, pilot, and race-car driver) who was notorious for his affairs with Hollywood starlets and his tender treatment of horses; and Bill Hartack, a wildly successful jockey whose squabbles with the press and his inability to conceal his unvarnished thoughts from influential owners and trainers were, by 1964, beginning to affect his career.

Using news clippings from 1964 and interviews, Kevin Chong offers a novelistic telling not only of the remarkable 1964 Triple Crown and Queen’s Plate races, but also revisits, fifty years later, the era in which Canada was struggling to establish an identity, needing, more than anything, a national hero.

“A straightforward, detail-filled, and nation-proud reciting of one of Canada’s ‘most thrilling stories.….’ Horse race history buffs may appreciate the glimpses of behind-the-scenes politicking, while a general readership may be gratified by the brisk pacing of the storytelling.” – Publishers Weekly

“[A] smart recreation of a four-legged hero.” – The Globe and Mail

“Extensive in detail and meticulously noted…. Chong’s prose is characterized by its breadth of offbeat information … and yields sounds portraits of the three men and their prized contender.” -Straight.com