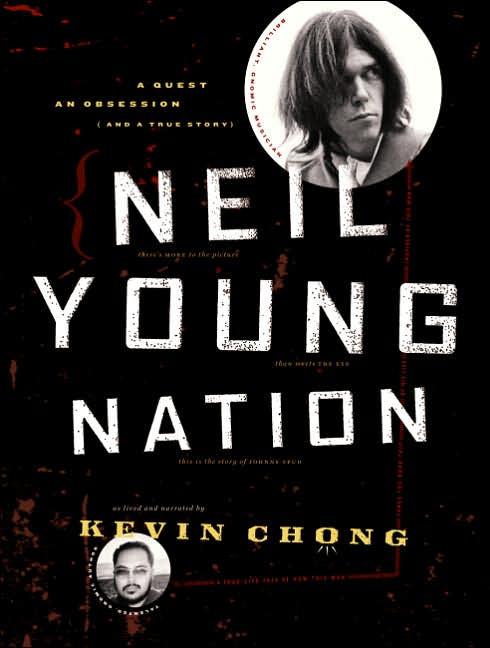 Neil Young is one of the most consistently popular musicians of our time. His brilliant, gnomic, lyrical music has earned him fans of all ages and persuasions. Novelist Kevin Chong counts himself among them.

Neil Young will turn 60 in 2005. Kevin Chong will turn 30. To celebrate these two milestones, Chong sets off on a road trip in search of his boyhood hero. Crisscrossing the continent, he follows that route that led Young to become a musical legend. He visits Winnipeg, where Young formed his first band, the Squires; Omeemee,Young’s childhood home; Los Angeles, where Young became a rock star; and many more of Young’s former haunts. He meets rabid Neil fans, talks to people who knew Young as a kid, and puzzles over Young’s strange, sometimes contradictory pronouncements.

Neil Young Nation is an entertaining account of Chong’s journey. But it is much more than a conventional travelogue. It’s an idiosyncratic, irreverent, free-wheeling pastiche that incorporates elements of biography, mock hagiography, cultural criticism, humor, and personal essay. Chong’s brief vacation from adulthood teaches him something about rock and roll, contrarianism, the allure of the road, being cool, and aging gracefully: staying Young.

” . . . this very funny highway diary proves that even if you don’t get to meet your hero, often the journey is all that really matters.” -John James, Noise Magazine (US)

“Neil Young Nation is definitely a full-ass book. Maybe it’s even an ass-and-a-half of a book . . . It’s literate, it’s silly, it’s a treasure trove of Neilster trivia, and insightful even to those who only know his hits.” –Ricepaper Magazine

“By turns travelogue, cultural critique, and biography, it’s anchored by the author’s love of Young’s music and a desire to understand his place in the world.” –Metroland Holiday Gift Guide

“Chong’s story of his trip . . . runs parallel with a highly subjective, non-linear account of Young’s life and work thus far. The result is not quite a rock biography, not quite a guys-bonding road trip journal and not quite a pop culture treatise, but an original melding of the best elements of all three. So let’s jus say that Neil Young Nation is a funny and eloquent testimonial to what art, at its best, can do: make us feel a little less alone.” -Ian McGillis, The Gazette

“The author is a superb historian and vividly brings these actions to life again.” –BookReviews.com

“The chapters on that One Great City Winnipeg shine brightest . . . The interviews with Winnipeg author John Einarson are worth the price alone.” -William McGuirk, Oshawa This Week