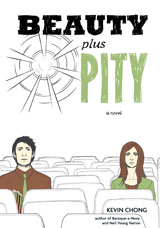 “Beauty plus pity—that is the closest we can get to a definition of art.” —Vladimir Nabokov

In this tragicomic modern immigrant’s tale, Malcolm Kwan is a slacker twentysomething Asian-Canadian living in Vancouver who is about to embark on a modelling career when his life is suddenly derailed by two near-simultaneous events: the death of his filmmaker father, and the betrayal of his fianc�e who has left him. Soon he meets Hadley, the half-sister he never knew existed―the result of his father’s extramarital affair―and as their tentative relationship grows, Malcolm is forced to confront his past relationships with women, including his own mother, an art teacher working through her grief as well as her resentment at her son befriending her husband’s daughter.

Written with a winsome yet plaintive eye, Beauty Plus Pity is about a young man who’s forced to reckon with the past as he works through his lifelong ambivalence toward his hyphenated cultural identity, and between two parents holding intolerable secrets.

It took me a moment to find the person my aunts had been talking about. She had hidden herself in a far corner of the room, and sat on the bench of an electric piano that had been pushed aside, a piece of gauzy tarp thrown over it. On a plate balanced between her knees was a piece of coffee cake. She didn’t look much older than sixteen or seventeen, a tall, robust-looking girl with big walnut eyes, a bell-shaped forehead, and a buttery complexion. One corner of her face was curled into a deeply preoccupied expression.

She was in a dark crushed velvet dress with large buttons running down the middle, green tights, and boxy platform shoes. She was my newfound sister, and when she caught me looking at her, the corners of her mouth turned down. Who was that starting back at me?
Reviews

A novel of heartbreak and humour, Beauty Plus Pity is written with an energy and humanity few novels possess. Kevin Chong is an extraordinary writer who is at the top of his game.
—Steven Galloway, author of The Cellist of Sarajevo

Funny and devastating. Chong is a melange of Bukowski and Woody Allen.
—Rawi Hage, author of De Niro’s Game and Cockroach

This unassuming, well-written novel is quiet in every way—subtly entertaining, poignant, and funny.
—Publishers Weekly

Chong has come up with one of the funniest characters you’ll come across.
—Uptown (Winnipeg)

A well-written portrait of the (maybe) artist as a young man.
—Hyphen magazine

Chong’s nuanced structure keeps emotions under tight control, to be revealed at the author’s discretion and not a moment sooner. This level of authorial control is especially poignant when considered alongside the Vladimir Nabokov epigraph. Chong knows he must kill his beauty to take Malcolm to the next stage of his life, to give him something to feel, something to latch onto that is concrete and tangible, beyond his tepid ambitions and failed relationships-to show him that art is a social production, and is guided by many. When pain and strife are ignored, art-true beauty-ceases to exist.
—BackListed

An entertaining story … Beneath Beauty Plus Pity‘s deadpan surface is a memorial to life’s transitory and cyclical nature, and to love both lost and found.
—Georgia Straight

The story is whip smart, and as Malcolm comes to understand his parents’ mistakes and the reality of their lives, he grows to understand who he wants to become, and how he wants to love and connect with the people in his life. It’s a story most people will relate to on some level, and one told with humour and insight.
—The Globe and Mail

A little beauty of a novel: funny, wise, and subtly heartbreaking … [Chong’s] understanding of humanity’s foibles is wonderful, and Malcolm’s trek to maturity is one I won’t soon forget.
—Winnipeg Review

With this second novel, Chong takes a prominent place among the cadre of West Coast writers, including Douglas Coupland, Zsuzsi Gartner, and Timothy Taylor, who are carving out a place within Canadian literature for writing that tries not to wear its heart on its sleeve, maintains an ironic detachment from deep passion, and explores how living in a world of shiny high-tech surfaces affects us all.
—Prairie Fire Review of Books